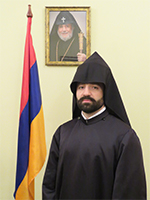 In 2001 he completed his schooling from Meghradzor Secondary School.

In 2002 he entered the Gevorkian Theological Seminary at the Mother See of Holy Etchmiadzin.

He graduated from the seminary in 2008. On 25 December 2006 on the Feast of St. Stephen the Protodeacon, he was ordained to the diaconate by Arshbishop Ararat Galtagchyan.

In June 2008, he successfully defended his thesis entitled “The Life and Works of Deacon Mesrop Taghiadyan.” Following his graduation he served as the Secretary in the Procurement Department of the Mother See of Holy Etchmiadzin for one year.

In September 2012, by the directives of His Holiness Karekin II, he was assigned to serve as the Vice Chief of Chaplain of the Armed Forces of the Republic of Armenia.

From May 2015, he was appointed as the Vicar of the Artsakh Defense Army. Thereafter from August 15 he served in the Dioceses of the Armenian Church of the United Kingdom and Ireland. During that time he also attended English Language Classes for 12 weeks at the Kensington Academy of English.

On 18 April 2016, by the directives of His Holiness he has been appointed as the Pastor of the Indian Armenians and Manger of Armenian College and Philanthropic Academy.

Since August 2017, he is the visiting pastor to the St. John the Baptist Armenian Church in Yangon, Myanmar.